This document was recently translated into English and provides a simple structured step-by-step approach to continuous cover management practices to support foresters and forest owners who wish to successfully adopt continous cover forestry in their forests. You can purchase copies of this booklet from Pro Silva Ireland.

Further information about successful underplanting for continuous cover silviculture can be found on the Forest Research website.

2017 Charter for Trees, Woods and People

More than 50 organisations, led by the Woodland Trust, are leading UK society in a call for a charter that will ensure that people and trees can stand stronger together in the future. This charter, strengthened by support from all corners of society, will provide guidelines and principles for policy, decision-makers, businesses, communities and individuals.

CCFG is pleased to be supporting a consultation, hosted by Sylva Foundation, that will enable woodland owners and custodians across the UK to help define the 2017 Charter for Trees, Woods and People.

The ANW Deutschland e.V. (Pro Silva Germany association, headed by Hans von der Goltz) started at the end of 2015 a project called “BioWild”, dealing with the disequilibrium between natural forest regeneration / forest biodiversity and ungulate populations in Germany. In close cooperation with the universities of Dresden (Prof. Michael Muller), Gottingen (Prof. Christian Ammer) and Munich (Prof. Thomas Knoke) 25,000 hectares of forest lands will be monitored within 5 pilot regions for the upcoming 6 years. Our key objective is to promote biodiverse, mixed, stable and resilient forests. Based on field observations the BioWild-Project memberswill demonstrate to the public, and to the participating forest owners and hunters in particular, which immediate and long term ecologic and economic effects their decisions have on silvicultural issues, biodiversity or hunting. For this purpose the project results will be processed as easily understandable demonstration sites in the pilot regions. Guiding principles for policy and decision support will also be formulated. If you want to get more information about the BioWild-Project, please go to www.biowildprojekt.de.

Pro Silva Ireland held a field visit in Knockrath Forest, County Wicklow. This was a particularly important event in terms of promoting Pro Silva outside of the Pro Silva network since Duncan Stuart and the EcoEye Team recorded some of the days discussions for the EcoEye TV programme which is a very popular TV programme in Ireland. In addition, Donal Magner, Forestry Editor for the Irish Farmers Journal wrote an article about the day which helps promote Pro Silva principles to a new audience.

The outcomes suggest that this approach could offer significant benefits of resilience to novel pests and diseases and, to a lesser extent, climate change. There are also advantages in terms of silvicultural development and ecological sustainability. The full report can be viewed on the Scottish Forestry Trust website.

We are grateful to the Forestry Commission for funding the production of these web pages and the conference report. They include pdfs – and some MP4s – of speakers’ presentations, the Conference Report and recommendations, and information on the research poster exhibition which was displayed at the conference. See Conference Home Page 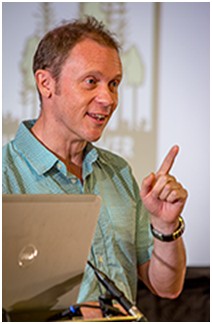 Richard joined the Lake District National Park Authority as Chief Executive in June 2007. Previously he was Regional Director in the North West for Natural England, a role he took up in October 2006. Richard worked for one of Natural England’s predecessors, English Nature, for 15 years.

Richard is a Geography graduate from Sheffield University where he also gained an MPhil in Coastal Geomorphology. A Fellow of the Royal Geographical Society, away from work Richard is a keen climber, runner, cyclist and skier. From September 2012 Richard became a Board Member for the Environment Agency.

The Lake District National Park has a long proud history over millennia of being managed by people to deliver what the society needs at the time. Society’s demands and human management and in turn the landscape have continued to change over time. This “cultural landscape” is the key aspect of the Lake District’s bid for World Heritage Inscription as the UK nomination to UNESCO in 2016. The Lake District National Park landscape continues to deliver a wide range of high quality ecosystem services for society, but we need to sustain these into the future through sustainable economies and communities and in the face of climate change and other pressures.

Continuous Cover Forestry has a significant role to play in the National Park to help protect and enhance the special qualities of the National Park and the potential World Heritage Site, contribute to climate change mitigation and adaptation and deliver the wide range of high quality ecosystem services that society demands now and in the future. The Lake District National Park Authority with a huge coalition of communities, businesses and partner organisations are working together to plan and deliver this sustainable future.