The RSFS Monitor Woods Scheme and its data management programme ‘Canopy’ are designed to provide a unique research and learning resource across the forestry sector and for the wider public. The principle objective is to facilitate access to good practice in forestry and to encourage more and better managed woods to deliver an optimum range of multiple benefits for public and private good.

Simon will use his extensive forestry and environmental knowledge and facilitation skills gained during his career to date in both temperate and tropical forestry to plan, lead and execute a development strategy to promote the adoption of the Monitor Wood Scheme across Scotland’s forest sector; State, Private and Voluntary, with visits to assess and recruit suitable Monitor Woods.

Simon will also be responsible for data management, ensuring appropriate dissemination of information and learning, through provision and maintenance of Canopy, the scheme’s publicly accessible online data resource.

More information about the Monitor Woods Sceme will be appearing on the societies website www.RSFS.org.uk.
Simon can be contacted at monitorwoods@rsfs.org.uk.

Organised by Bangor Forestry Students Association (BFSA) and Woodland Heritage in collaboration with the Continuous Cover Forestry Group (CCFG), this will be the first time in nearly 15 years that Bill Mason has spoken at Bangor University.

“As an alumnus of the University and a long-time proponent of alternative silvicultural systems, BFSA was really keen to invite Bill to speak”, said BFSA President and Woodland Heritage Ambassador, Sarah Ellis.  “CCF is an integral part of the University’s forestry degree courses, one of a number of various approaches to silvicultural management that we’re encouraged to consider.  There are also a huge range of different definitions banded about, so this talk by Bill Mason will undoubtedly be both informative and inspirational”.

“Many field meetings reported in forestry society journals today include an account of a visit to stands that are being identified for management under a CCF regime.  However, despite this welcome recognition of the potential role of CCF in British forestry, recent surveys have suggested that perhaps only 10 per cent of British forests are being actively managed using CCF silvicultural systems.

So, there remains a major issue of translating the increased interest and awareness of CCF into practical actions that will transform our forests into the mixed species and varied structures that are envisaged by forest policies across Great Britain.  Thanks to the interest shown though by the next generation of foresters, such as the students at Bangor University, I remain hopeful that CCF has a bright future and that CCF will be adopted ever more widely.”

Bill Mason’s talk is open to all and for more information, please contact Sarah Ellis via afu896@bangor.ac.uk. 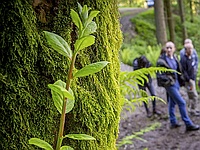 In order to continually improve the benefits of membership to the CCFG, committee member Chris Andrews has prepared a very useful map tool which allows you to visually see on a map all of CCFG’s past field visits. Our members have the option of logging in from this page to be taken directly to the reports available for those visits too. You can find the tool on our Events page.

If you are a CCFG member and would like one of our new car stickers to display in your vehicle, please email Mandy at administrator@ccfg.org.uk to request one. Provide your name and postal address and one will be sent out to you shortly. 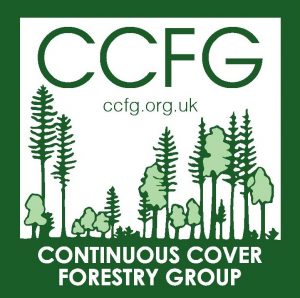 Based either at Whitney Sawmills in Herefordshire or from home, this new post will be responsible for the smooth running of this small but growing charity (No. 1041611), at the heart of the timber supply chain.

Salary: £8,736 for 14 hours per week (£21,840 per annum fte), plus reasonable expenses and generous holiday allowance for a post with an initial term of two years.

For more details, or for a Job Description, please contact enquiries@woodlandheritage.org.uk

To apply, please send to the e-mail address above your current CV plus up to 500 words describing the skills, knowledge and experience you would bring to fulfil the needs of the Job Description.

Short-listed candidates will be invited to interviews to be held on Friday, 1st February in Surrey

Coed Cadw, the Woodland Trust in Wales, is hosting a full-day conference to take in the views from the forestry sector, hear from woodland owners and managers who restore and manage Ancient Woodland plus get an update on support and funding available in Wales for these truly important sites.

Ancient woodland is the richest land habitat of wildlife in the UK but only fragments now remain. These longstanding woodland sites are often threatened by issues such as plantations, over grazing and invasive species and will still contain important woodland features, which through careful management can be safeguarded. With sensitive transformation back to a mix of more native species with a greater diversity in age, these woodlands will become more resilient to other threats such as pests, diseases and climate change, ensuring they survive for future generations and also provide all the varied benefits of a well-functioning woodland ecosystem.

This will be a chance to contribute to an open discussion and debate with practitioners and policy makers around practical and best practice management of degraded Ancient Woodland sites in Wales, chaired by CEO of the Institute of Chartered Foresters Shireen Chambers.

See the flyer for more information on the programme and how to book.

This international forestry workshop is being organized jointly by Pro Silva Bohemica and European Forest Institute and held in the Czech Republic from 25th to 26th October 2018.

The workshop will be aimed at one of the hottest topics of today in central European forestry that lies in the necessity to transform pure coniferous even-aged forest stands. Attendees will visit the Exemplary Forest Units of Uneven-aged Forestry within the Forest District of Kocanda and will look at the transformation of 25 years of pure even-aged Norway spruce stands applying Pro Silva principles. See the letter of invitation for further details and how to book your place.

This bibliography produced by Sam B. Manning and James D. Walmsley was published in August 2018 and builds on from Sharon Rodhouse and Edward R. Wilson’s two previous bibliographies published in 2006 and 2010 respectively, which compiled research published in the subject area of CCF. It features a selection of peer reviewed research papers, reviews and text books published between January 2011 and May 2018, authored by academics and forest professionals from across the world. This publication is freely available to CCFG members in the members area of the website.